An interview with Saaz Aggarwal
By Cherry Agarwal 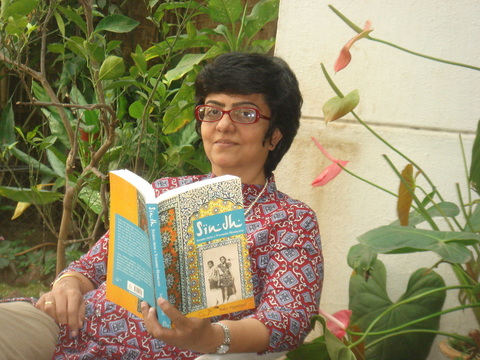 Saaz with her book and wearing a traditional Sindhi print called ajrak.

Saaz Aggarwal was born in Bombay on 5 October 1961, so close to Chowpatty Beach that to set sail and embark on a long voyage right away, all she had to do was cross the road. Saaz is a voracious reader and avid blogger. Hear more from her as we go down memory lane uncovering more.


How did you come into writing?


I’ve been a writer since a very young age. I had my first byline when I was 7 years old. Several years ago I wrote a poem which I think expresses it best, so if you will excuse me, here it is:

The songbird on my shoulder:

My mother knew I was a writer

Long before anyone else did,

Least of all me.

When I was 7, she told me to write a poem about

And it appeared in the school magazine.

Bitten by the lust

To see my name in print

that I must, indeed, be a writer.

It struck me one day

That the words that flowed from my pen

So many years have passed.

in which I never wrote

on which I could write.

And when I finally sat down again,

with pen in hand,

When my words flow,

smooth and beautiful and artistic,

out on the keyboard –

Where do they come from?

the songbird on my shoulder

the constant and reliable companion

pouring its sparkling wit into my work

independent of my meagre consciousness –

What is it about creativity that you find intriguing?

As I said in the poem – beautiful things just appear, quite miraculously, and you wonder where they come from!


What was your inspiration for taking up a task like ‘Sindh: Stories from a vanished Homeland’?

I started with a process of documenting my mother’s memories of her childhood. Through stray remarks she made, I got more interested, and began reading all I could and interviewing others to get a broader picture. When I experienced at second hand some of the depth and beauty of the land they left, and yet so determinedly put behind and forgot, I knew I had to write something that would communicate what I had felt to others to whom it would mean as much as it meant to me.

Is there much scope for new writers?

Yes, absolutely! There are new formats, and new possibilities offered by advancing technology. There will always be people who enjoy reading. However, new writers looking for mainstream readership might want to keep reducing attention spans in mind.

How should one go about the securing the copyrights of one’s manuscript?

I think there is a legal process, but I’m sorry, I’m not aware of the details.


What should a writer keep in mind when starting out on a particular script?

I think primarily the reader for whom they are writing.


What is the story behind documenting Partition stories specifically?

I started doing this to understand for myself, and share with my extended family, a time in history which concerned us intimately but of which we knew almost nothing. It gave me a new and enriching perspective of not just a particular community but also of our country, and of myself as an individual. I would like to share with others the immense experience of honouring the past of those who struggled and sacrificed, and had by necessity to put their feelings and needs aside, and gave us what we have today.


What trials did you face en route to your first publication?

It was the simple process that every salesperson faces: you enter a new territory; you find the courage to approach strangers and offer your product; you learn to understand that others’ reaction, whether rejection or affirmation, need not be a measure of your personal worth; you develop the skill of consistent follow up! They were trials that constituted learning and helped me to develop a strategy with which to face the world.


Tell us of any distinct memory that stands out.

In one of my early sessions with my mother, she told me, “Our families come from five villages in Larkano district.” She began to name them and I typed into my laptop. However, the fifth name eluded her. “I’ll get it!” she promised, “I’ll think and tell you.” And then she shook her head and said, regretfully, “There’s no one left who can tell me that name.”

When I keyed the four names into my Google task bar, which promptly threw up the fifth, her amazement showed me that to her mind, those villages had simply stopped existing when she and her family left Sindh, never to return. I realised that for the children who had left Sindh with their parents, the abrupt excision and denial had made their childhood home a place that lived only in their memories and that is why I called the book Stories from a Vanished Homeland.

When Oxford University Press, Pakistan, took up the book to publish in that country, however, they were uncomfortable using the word ‘Vanished’ in the title so in their version we have called it Stories from a Lost Homeland.

How has this process developed you at a personal level?

It has made me a more patient listener. It has developed my skill at documenting rambling narratives and weaving them into a story that will engage readers as it gives them a glimpse into another world.

While writing this book one of the biggest changes was my feelings for my grandparents and their loved ones, most of whom I never knew – it made me feel part of their larger community and that was something I had never experienced before. I can also see my mother not just as my mother but as a human being with her own formative life experiences. Most important of all, I value the fact that through this process she was able to reclaim a part of herself that was denied her for decades.


Do you have any tips for writers that are just starting out?
Yes – read as much as you can, read everything you can lay your hands on, let it soak in! Understand that grammar is important, but that idiom is even more important. And here’s the best advice to writers that I’ve ever read, from George Orwell:

·         Never use a metaphor, simile or other figure of speech which you are used to seeing in print.

·         Never use a foreign phrase, a scientific word or a jargon word if you can think of an everyday English equivalent.

·         Break any of these rules sooner than say anything outright barbarous.


If there is anything more you want to share with us, please feel free.
There is a very strong negative stereotype of Sindhis as being loud, flashy, calculating, and basically people to avoid. For some reason all that the Sindhis have contributed to Indian society, even though very prominent and all-pervasive, is never acknowledged or even noticed! It’s difficult to understand the reason for this. Perhaps it’s because the community does not have good brand ambassadors. The youngsters have no good role models. Strong leadership is lacking. People gravitate towards the leaders to stake their own claim to power. And yet, there are thousands and thousands of really smart, soft-spoken, wonderful Sindhis who lead their own lives peacefully and contribute to those around them in any number of ways. For some reason, they seem to be invisible!