Beyond the Radcliffe Line
By Srijita Kar Chowdhury 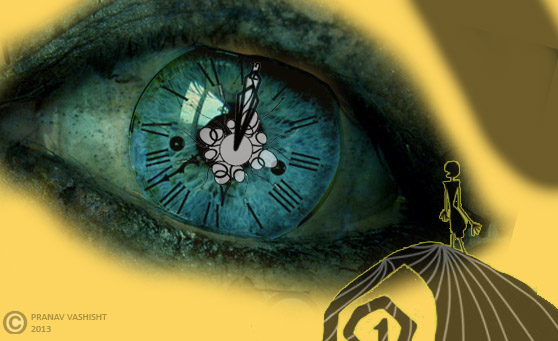 At that stroke of midnight hour, in middle of sleep,
Stealthily bomb of partition was burst upon people,
Burying the dreams of freedom, tears ran down deep.


Inside that broken piece of land, that then faced cripple,
“Alas! Freedom is ours,” but still,
He couldn’t breathe in it,
At last, no more slavery to thrill,
But sufferings exist.


Doors closed forever, treasures buried down,
Whatever could be filled in those tender hands,
Was filled then, without an expression of frown,
Thus grief, lost all places to stay on those lands.


But he was unable to express what he left,
On that other side of the line,
A deeply marked incredulous cleft,
Leaving him as an armour, without shine.


Souls corroded, bodies departed away,
Nothing’s left, except that memoir of her,
Which hangs around his neck to sway,
It sways and sways till it appears to be amber,
Amber again, to feel the love,
The love they shared.


Feeling as free as a dove,
They never cared,
He still feels, she is for him,
Caring least about the others,
She is even up to the brim,
In spite of having fierce brothers,
But fate couldn’t join them both together...


Due to declaration of the Radcliffe line,
Their destiny never got sealed as one forever,
And the armour never gained back its shine,
She died after living a life as of his Heer,
And he, survived till last being her Majnu in utter sheer...

About the Author - Srijita Kar Chowdhury

Experimenting with words, creates a new world for this writer.

Suicide Note #3   "...9 months and it is still not over. I have a fear that I will lose myself in this race for living a life less tragic. The morning sunshine doesn’t bring a new hope for me mom rather it reminds me of yet another tormenting and unkind day ahead.


Suicide Note #2  Emotions and feelings have become nothing but void to me. I am sure its going to be difficult for you’ll to forgive me but probably this is the best decision to take now. Death will bring me peace and victory over all my failed attempts in life


Suicide Note #1  Life turned out to be void after mom died and the lady you remarried has been  like a nightmare to me. Her Daughter drives me crazy. Mom’s memories never left my mind like they did from yours. You three make a happy family. I probably should go and take ..."