Do you agree to 'I agree to the Terms and Conditions?'
By Cherry Agarwal 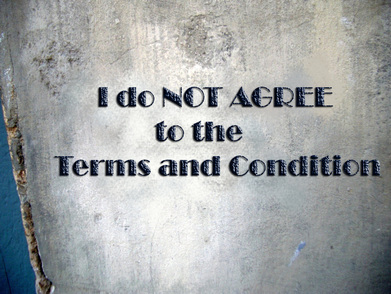 Every time I had to subscribe, create, edit, write content so on and so forth, I solemnly clicked on ‘I agree to the terms and conditions’ without my numb brain processing that the line actually presumed that I had read the terms like an economic strategist rather being who I am – a procrastinating common man. My brain was specifically asleep to stimulations from impulses generated after the eyes blinked at ‘I agree to terms and conditions’ and the fingers nimbly pressed enter and moved on in such a sprightly dance that the mind left the work for the sub-conscious to do. What the slothful conscious does not do, do you think that the sub-conscious will?
If you have the answer, then you are right. Right that it’s ‘NO’.


Our conscious mind is like the public of a developing country, which is stirred up now and then, to bring about a sudden transformation in living standards. It awakens only to certain specific harbingers, which varies with context from time. While our sub-conscious, is like the Government of that same country, just below the threshold of conscious stimulation. So as to make the sub-conscious trudge on its chicken legs, shifting the weight of its lofty hunchback from one pot-foot to the other, we, the so-called conscious have to rattle a lot of cages.


But then I grew up. (It was gradual and painfully slower than it sounds, though now it seems it was rather quicker as I enter a new race for job and career akin to one I had won, just before I was born – the race where I competed with thousands of lakhs of what could have been my siblings if they had won the race too. Another thought cracks its knuckles as to what would have happened if there was an “I agree to the terms and conditions” as a clause to the winner’s gift? )

I grew up and as I attempted at an account creation, my stirred curiosity fell along the line of thought as to what the peculiar, mysterious and uninhabited link (if I may say so) beheld.  The opened Pandora’s Box held my absolute attention, as it had to be read thrice to get the contrivances of the deed that I had never sat my eyes upon, before.

What broke my ‘unblinked’ stare was the missing option: I do NOT agree to the terms and conditions. It was not that I was expecting to avail anything from the option but its ‘non-presence’ made a notable mutation in the thought- system. As a selfish common man and a smart, hardcore entrepreneur, if I am providing the user an interface to make an account, it is only rationalized that I would do so on my terms and conditions and thereby put clauses for others adherence of the said.


But in this revolution of, by and for customization; it was perplexing that ‘the deed’ provided no such availed options provided by this hardcore entrepreneur that gave the user a page to create an account at the same time by-passing certain specific rudimentary contrivances in the presumed conscious deed called – I agree to the terms and conditions.

About the Author - Cherry Agarwal