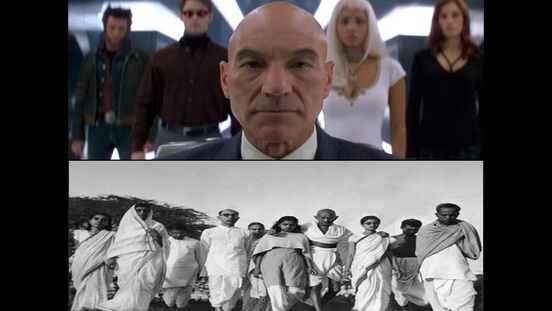 
Boredom can really make people do things that one in logical senses would condone. This might just be ramblings of an over-slept brain. Moving on, the mundane affairs of a teenage hostel life, pushed me to the extent of switching on the idiot box and flip through motion pictures. (Some of the readers might only be wondering, which century was this written in, that movies have become motion pictures, fear not!!)

It was this late afternoon, that I ended watching X men – First Class of the famous X-men series. The beginning had left not much of an impression on my sleepy humor but the end lulled me off to sleep, that had been rather eluding me with an indeed very strange dream.

It was in this state of sleepy interlude that Erik alias Magneto deflected a bullet with his extraordinary mutant powers and the sincere bullet directly oriented itself in Charles’ alias Professor X’s direction only to hit him with paralysis and rendering him to the services of the wheel chair for all its prequels.  But this was not the strangeness I was referring to; it was the juxtaposition of Charles as Mahatma Gandhi. Yes!! It was along this line that I started finding similarities in instances between the two legendary characters. Though one remains true in reel life, other had walked in proper flesh and bone.

When Charles got hit by the bullet, I was reminded of Gandhi’s assassination and his assailant Nathuram Godse. Like Gandhi, Charles did not hold the shooter responsible instead it was Magneto that was charged.  This started adding akin to rungs like Charles asking Raven to assert her human form because it made it easier to blend in with the humans who did not understand the mutants, while Gandhi persuading Indians to attain British education so that the fight could be easily won.  Charles had the telepathic powers while Gandhi (without mutant powers though) could predict the reaction of people, that is why he became such a great politician.

More philosophical connections between Professor X and Professor Gandhi would be both wanted to co-exist peacefully. Charles with humans and Gandhi with the Muslim brethren but eventually both created a secure space for mutants and Muslims respectively. (The school and The State)

Last but not the least, the most classy link that I found (yes, these led me to do a little research, to find out more) was that Charles when killed in a telepathic battle with Phoenix alias Jean Grey, succeeds in transferring his mind to that of a brain-dead man, similarly Gandhi  lived, even after he was killed, through his ideals and principles.