Rapist Should be Hanged
By Aayushi Anand 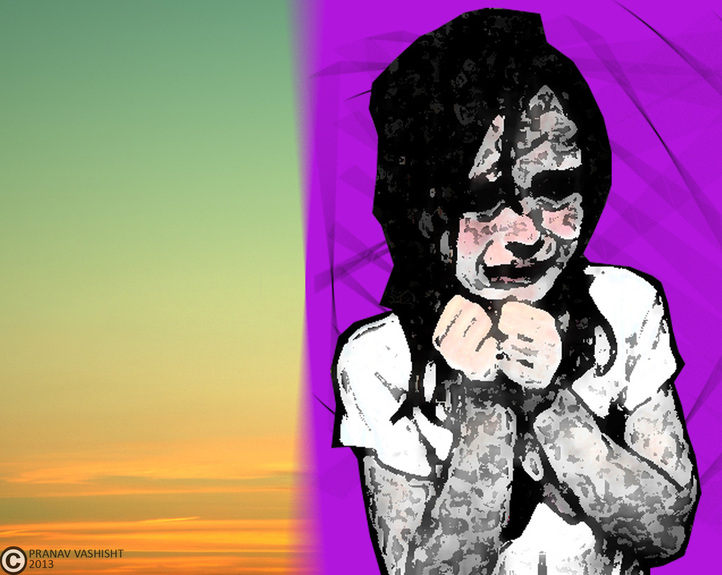 Her dilated eyes scanned the inferno that the crowd had created. They rushed past her, brushing harshly against all the tenderness that she held within her. A claustrophobic sense of fear paid a visit, as the blood within the body began racing towards the brain. Thoroughly confused and disheveled with the encounter, her rational much as her sense of balance, collapsed. In the midst of this nervous flight, she allowed herself to be jostled around. A painstaking embarrassed smile mocked at the ladylike charm that must grace the face, despite the nearing pallor.

All said and nothing done, she quietly assumed her place in the herd. As she ran her hand down the leg to caress the folds of her skirt, she wondered how many hands had done the same to it. The thought evoked a surge in the bosom that refused to acknowledge the grime that had stained it. With the usual maiden’s vulnerability, the lid of the eye pressed tight against its other half. This passionate kiss of the two conceived yet another tear. As it ran down the visage, she wiped it off. Just another stifled story, it became.


Headstrong she stood, for the tear would break the make-up that they expected her to drown her face in. She was beautiful or not, nobody knew. It was just another face that they had decorated with the stereotypes. Ignorance is bliss, they say, and in her case, acceptance even more so. Denial would only shame her in her own eye. Silence is golden, and her silence assumed this gold as a symbol of its chastity.


Her silence is golden but ours is not. Very rightly, most people have demanded justice for the rape victims through the formulation and implementation of draconian laws. However, at the issue of the rapists’ death penalty, I beg to differ. Justice is nature’s phenomenon but it is not that this issue must be left for the Almighty and karma to deal with. We human beings have the strongest weapon in our hands, and that weapon is thought. God will only help us when we as a society help ourselves. It then follows that the rapists’ must be punished.


An alternative perspective is punishing the thoughts. If as a society we wish to grow together, it is essential for us to operate on the same frequency as each other. Any and every crime involves at the least two stakeholders - the victim and the criminal. Incentive is what gives a route to most of our actions. If we kill the incentive, the crime will die too. The incentive lies in the conditioning of our society, both psychologically and physically. As a people, we have grown up with the idea of patriarchy in the most subtle of manners. If we degenerate this very thought process from our psyche, there will be no rapist and no rape victim either. This may sound like a utopian proposition however, only a task that has been started can be accomplished. We must hence begin. Awarding a death penalty surely does not sound like the best beginning to begin with…

BACK
About the Author - Aayushi Anand is a contestant in Quilled Words Writing Contest and her arguments bagged the first place.

The Wife  "...The gilded beam of the sun gradually metamorphosed into a murky aura...there was a sudden knock that perturbed the silence...Her
tired eyes broke into tears and her wounded arms embraced him back as he caressed him in his tenderness..."

Twisted down the tale  The fragrance that filled the room effervescenced as wild passion from within. Her gauzy gown slipped over her shoulder revealing her bare body. Her glowing, grain- colored skin rippled in him the urge to hold her by the arms and kiss her with untaming....