Rings of Smoke
By Abhishek Pandey 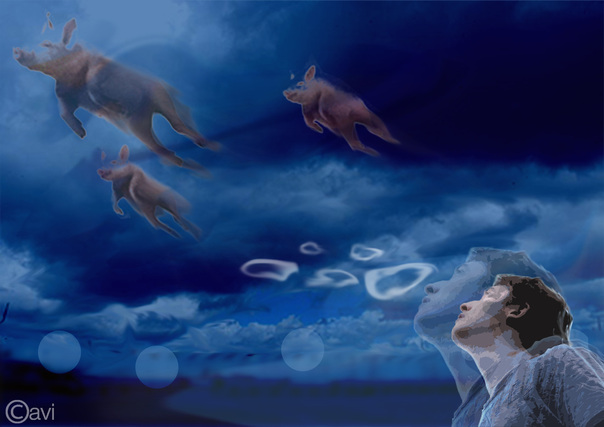 
On a windy day, shyly sitting in a sty,

Wrote he some lyrics, as this loony passed by,

Saw he, the smoke rising, from the corner of his eye,

And remarked, "Along this current, even a pig could fly !"

Floating on a wisp of air,

Perhaps an inhalation in despair,

Or rising from those many fires lit,

Of human origin, and human wit,

To a rustic tune, ascending from a pit.

And to his solitary plight,

From their celestial height.

A windy night 'twas, in the sties,

In the dark, it all lay, as it all lies

That ring of smoke came to him,

In a willy-nilly, it flew past,

Absolved it was of all doubt,

Not a tantrum it threw,

Of labor and of leisure too.

But this ethereal ring did prompt,

Memories from '71, when in the thoughts,

He had seen, rings of smoke through the trees.

From the corner of his eye,

He glanced again,as it passed by,

In the moonlight it gleamed,

Flowed thousands of them in a river,

And could make a heart quiver.

Fascinated was the loony,

By this shy acquaintance of his,

Lit he the charred paper,

A multitude sprung from the smoke,

The indolent fool, fancied a thing or two,

From those lips, came forth a few,

And still floated; pondered he, Why ?

With ambitions as huge as swallowing the sky,

Gestures, which gravity did defy,

Vanished they, without a solemn goodbye.

About the Poet - Abhishek Pandey