Sanity is Over - rated
By Abhishek Pandey 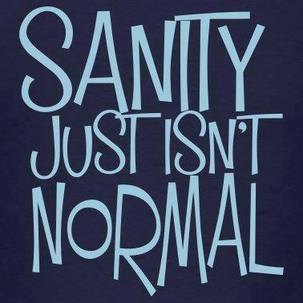 “Without deviations from the norm, progress is not possible.”


The state of being sensible and reasonable is termed as Sanity. And retaining one’s sanity is deemed

to be a necessary evil,  for a person to survive in a straitjacketed  society. But the truth is, the way

things have been going in this age, it is almost impossible to be ‘sane’. I personally believe that the

same things can seem unlikely when seen through the lens of a different perspective.

Today, people have based their faiths upon a cocktail of belief systems. And all these people

comprising this society are a crazy breed. There, I used one of those stereotypes again, ‘crazy’.

People quite easily judge things. They are biased in their approach towards man and woman, good

and evil, Yin and Yang, positive and negative, sane and insane which are some of the examples. But

what they do not understand is that without the existence of one, the other is meaningless. They are

Through various experiences and accounts that I have observed in any sensory form, I have seen

people having a stereotypical view about sanity. So many people who are almost illiterate in

these terms have their own pre-conceived notions. They ‘assume’ that they know what reality is,

and therefore, what being sane is all about. Normal people dwell too deep in their own ‘real’ but

apparently virtual delusions and judge others on the basis of these illusions that they have formed.

And then, call others ‘mad’, ‘crazy’, ‘disturbed’, ‘weirdo’etc.. There have been cases where paranoid

the most creative and lively.

There is a hype about  ‘sanity’. While, almost always the probability of sanity producing something

productive, useful or aesthetic is zero. Majority of the innovations in science and technology

minds. Let me define these terms for you.  A ‘herd’ mind is one which is bound to the traditional

way of perception  and thought connotation . Nothing out of the blue with a text-book approach

and opposed to anything that can shake its belief system. While a ‘different’ mind is one which

has an open mind set about things. Open to all possibilities and looking for something novel in

the monotony. Quite regularly, these few ‘different’ minds that our society has our termed as

insane and blasphemous, like an outlaw. This is pure orthodoxy, by which even Galileo was not spared. Because

great minds then -  the theologians, said to Galileo, "We will not look through your telescope because we already

know how the universe is ordered. If your telescope were to show us anything different, it would be an instrument of
the devil."

People base their lives on what’s hot and selling. They trust, believe in, worship or agree with

whatever the masses do. Individual thinking is almost lost, just when it is the dire need of the hour.

And if there’s one living person who raises his/her head and feels the unease, senses that something

is wrong or something could be done for the betterment of humankind, they are cast out.

How the world terms an individual ‘sane’ is a most deplorable way of classifying a person’s psyche.

And if this is the way they’ll continue, then being sane is definitely not the solution.

“I’m afraid so. You’re entirely bonkers. But I’ll tell you a secret. All the best people are.”

About the Author - Abhishek Pandey