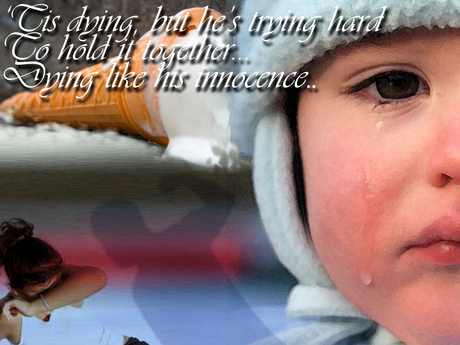 Illustrations - Ankita Singh
Stirred up by the ambient heat


Oh it melts but still it is cold !


It trickles down the curve,


The curve of the cone.


Amidst those wails and screams


Of a woman in misery,


Violets dripping on the hand


On the trembling hand,


And cozened shades of indigo


An aroma so stimulating,


Of the demented days of a child...


A child who saw horrors,


A child who witnessed gore...


It cast a spell on him


A voice from the limbo


He swears it was the cone !


The cone in his hand,


It beguiled him to surge


Almost in a trance,


It's desire became his urge,


And a cozened shade of crimson fell


Was it the blood, was it the cream ?


It swirls and it twists,


And arrives to the base


'Twas beautiful in his days.


With the vertex in his hand,


He wonders, if the voices are right


One and all said he is a loony

About the Poet - Abhishek Pandey