Tedium #2 - The Present
By Rachael Joseph 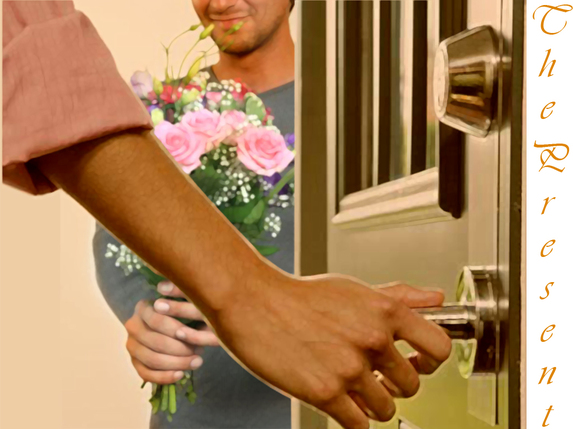 "In the confrontation between the stream and the rock, the stream always wins - not through

strength but through persistence”

Staring the mirror, that evening she wondered if her life was going anywhere. Jean entered

her thirties and imagined a life something similar to what she had, if not exactly similar. But there was

something missing. Most of her friends had a complete family. Photos on social network sites, showing

how happy they were added to her misery. It was almost as if they needed a third being to complete

their lives.  “He has been late these days. May be he is having an affair with that new office colleague he

keeps talking about”. Glaring right at her eyes she calmed herself thinking “No, he will never do that to

me. After all that we have been through, it’s impossible!”

Tring tring the phone rings. “Hi Honey! Sorry I got caught up in the meeting, I know I had

happiness would revolve around her husband’s arrival time from work. Never did she envisage in

her wildest dreams that she would be so disheartened from one stupid phone call. After all it was

wedding anniversary. “How could he forget!” she thought wiping a tear dropping through

her right cheek. “What did I do to deserve this. Why can’t he understand, at least once…..” Looking

at the kitchen platform she saw the meal she prepared with great fervor, staring right back at her,

as if they were mocking and laughing at her. Disappointment turned into anger as the minutes

passed by. She picked up the vessel intending to throw the dish into the sink as a result of her fury.

“Ting Tong” the bell rang at that very moment. “Who could it be at this hour!” she thought.

“Surprise! Happy anniversary honey” behind the large bouquet of flowers and her favorite

chocolates stood a tall man she loved. Giving her a peck on the cheek Robert whispered the

three magic words- I love you. All the anger and frustration vanished out of that door in a second.

Perhaps it had been so long she heard those words that she had forgotten how what it felt like.

That tiny voice inside her head that really wished that this would happen came true. After all who

does not love surprises? ”You actually thought I would miss our anniversary, how could you!?”

“You look beautiful sweetheart. As always!”  She knew he meant it! He always did.

After a while of romantic, mushy talks and dancing to her favorite jive numbers Jean smiled as

she laid the dinner table, and served the food prepared with such vigor.

“Just the usual. The meeting was okay. They just can’t get to the point, I tell you. But after that, I

“I waited for you and got all this ready.”

“By the way, you still haven’t told me where you went this morning or even last evening for that

“By the way, you still haven’t told me how the dinner is and this is your second helping now!”

Jean was grinning thinking that she had managed to change the topic for now. “Not yet!” she

“So, what’s the plan next?” she asked as she was clearing up the table.

“Dessert, right? Where do you want to go?”

“Grand bakery, of course dear ! But before dessert can we stop by and just take a stroll in the

“Sure, I wouldn’t mind that either. Even I am stuffed!”

favorite things these days. She felt cozy in his arms, something that no sweater or blanket could match

up to. But today was way too special than just a simple, romantic walk! She had to give him his gift. She

looked towards the sky and the stars glimmering at her. She was blushing and was wondering how to

put it. Cheeks pink matching the color of the roses she had planted.  The words just wouldn’t come out!

“You know what Jean I have been waiting to tell you this, I think it’s time we think of adoption now,

“Are you sure?” she asked, her heart hammering in her chest.

“Perfect! Now!” she thought to herself.

“Is there any other option you can come with at present? You are already 32. How much longer? I

“There is another option”, Jean looked straight into his eyes. He frowned in confusion. She put his

hand gently on her stomach. “Remember the last time on the night of my birthday in November? Guess

where I was this morning now.”

his eyes. “It’s been 3 months already!” I explained. “There’s no danger now. It’ll work for sure this time!

I am totally positive about it.”

“Because I wanted to be sure myself. Even I was afraid………but now I am not!”

He slowly smiled, with disbelief as he could not believe what he just heard. Tears of happiness

filled her eyes. The same happened with him. He hugged her gently. They stood there for a few

“That was the best gift you could’ve given me today!” he whispered in her ears.