The Adulterated Existence
By Tanya Jain 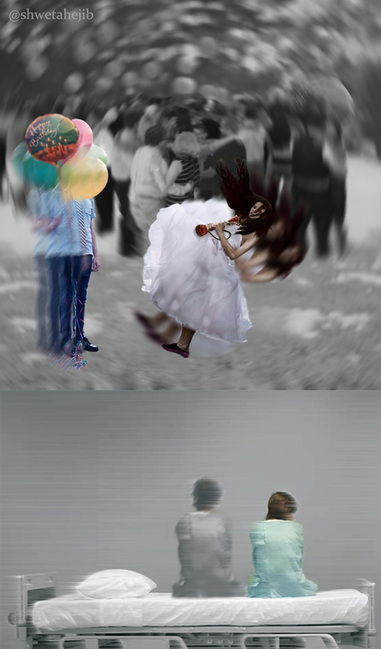 Illustration - Shweta Hejib
Birthdays , which in childhood meant a month before planned games filled party , cake cutting
and family celebrating it in full zeal somehow disappears when you surpass adolescence. There is
celebration, but of a different kind. A different set of people – invited and uninvited lot collect to
celebrate your day of birth, which for them is probably just another reason to party.

Ragini Mehra , final year student of bachelors in economics . Topper of the state, only daughter in the
clan, extremely loved and concerned about.

Rohit Manchanda , fellow classmate , good friend and a prolific guitarist in the college’s music society.
Not the heart of the college but yes the adored, cute guy – to whom I am sure every girl would have
encountered with awe.

College- where everything seems vast, everything is open and free, a sense of independence and
authority that rules within you; how it turns into a restrictive and choking atmosphere no one could ever
know?

I was an enthusiastic girl who trolled about the city and never feared of anything.

But this 21st birthday – why did it had to come?

Why one moment of extreme looseness, can make you lose even that one self-created virtue i.e. the
own proud existence?

Had I not celebrated the day?

Had I been calm?

Had I been more firm?

Probably I would have been a more stable person and more comforted one in my own eyes. This feeling
of degrading and the feeling of being watched about with questionable eyes kills deep within than
anything in this world.

They all say I am mad.

Rohit is the only one who understands me, despite all the fame that he has. Though he never mingles
with anyone, he just plays in concerts and leaves the stage. He doesn’t even like to get clicked because
he thinks he’s not good looking. But to my eyes he is the best looking lad. All he loves is to make new
compositions and make me listen at the very first instance. He has even given me some guitar lessons
for free, but I am still struggling with strings.

He wittily says, “Ragini, one day, surely a chord will strike between the two of us” and I always reply,”
Rohit, “No strings attached.”

We share this comfort zone which no other two people could ever share. There is nothing that we have
to think on before saying to each other. We two are just meant to be.

I had developed a habit of inhaling ‘hukka’ the moment I first started taking it. It has this soothing effect
and you can inhale the smoke in varied flavors. I personally liked the mint.

Rohit always complained about this habit of mine but to me it took me into a state of meditation. I
had made him understand that ‘this smoke is not injurious to health’ and it’s not that I am smoking
cigarettes. But he never approved of it.

It’s our final year and I had never had attended what people call here as ‘the house party’. So Rohit
advised me to throw a party on my 21st birthday where he’d tell me what and how to do stuff and who
should I call. It was exciting and it seemed that probably this birthday has something grand in store
for me. Probably this birthday in this city would bring all the nostalgia and I’d take back home all the
cherishing memories.

I was all high-spirited and enthusiastic of what all would happen on 28th day of January 2013. I had
invited as Rohit suggested all my acquaintances, friends of friends, their boyfriends and girlfriends. I
didn’t not want to leave anyone who had been a part of my life in these three years in the city, so I sent
a formal ‘what’s app’ message and personally called everyone to be a part of my celebration.

Though Rohit had planned almost everything for my special day and he was also the true and only friend
I had, I also sent him a very personalized message to be there.

He again used his wits out, “I am your Friend! Who said so? I am just helping a random fellow classmate
to organize stuff. I am not even coming to your party where your weird friends would irritate me. Thank
you, rags for the invite.”

I just thought he was kidding as always and he’d be around.

The day came, people entered in huge numbers with bouquets and huge gifts in hand but all I waited for
was Rohit. He was nowhere to be seen.

Everybody insisted on getting drunk and wild and I just asked them to wait for my dear friend- Rohit.

I was disgusted with the reaction of the people whom I called ‘friends’.

They said,” Ragini, you never told us about him?”

“Is he your boyfriend?”

I replied, “Don’t you all know he’s our class mate. He is cute, tall, and adorable and the one who plays
guitar in the college band.”

Everyone started laughing and said ‘are you getting high just with a glass of water!’

It seemed as if the world had turned upside down when they all tried to convince me that Rohit doesn’t
exist.

How could that be possible? I’ve been sharing my life for more than couple of years with a person and
one fine day a bunch of people tell me that there is no such existence. How in evident and brutal it is on
part of them who call me their friend and then take me away from the best soul that I ever had.

I tried calling rohit’s number but the woman always said “Please check the number you have dialed.”

It absolutely turned me mad. I had no clue how to approach him.

I took a breath and recalled all the time that I had spent with him and I couldn’t believe that I didn’t
know his postal address , I didn’t not have a single printed photograph with him , no piece of his hand
writing , no gift and even the guitar that he played was mine.

These sudden shifts of events absolutely left me clueless. I was numb. I couldn’t react.

I engulfed as much smoke I could. I drank alcohol beyond limits. It was the Best Birthday ever.

Twenty four hours later, I found myself semi-conscious in a private room of a hospital where surrounded
by men in white coat I was carefully diagnosed. I had passed out of alcohol overdose and excessive
inhaling of smoke had choked my throat and suffocated me.

A psychologist there after tried counseling me and even she tried to convince me that there is no such
personality as ‘Rohit’. I have created all by myself an adulterated self which has no existence.

They all say I suffer from a prolonged illness. I am not normal. I am different. Everybody is different.
Probably they all are unaware of the happiness that I have experienced. I know Rohit is occupied
somewhere and he would soon return. It is then all these people who have left me behind would believe
that I was just one of them and not different. Everyone has their individual space where no third person
ever has the authority to enter.
About the Author - Tanya Jain is a contestant of Quilled Words Writing Contest and 'The Adulterated Existence' deserved a special mention.
BACK