The Ballroom Soul
By Subhodeep Basu 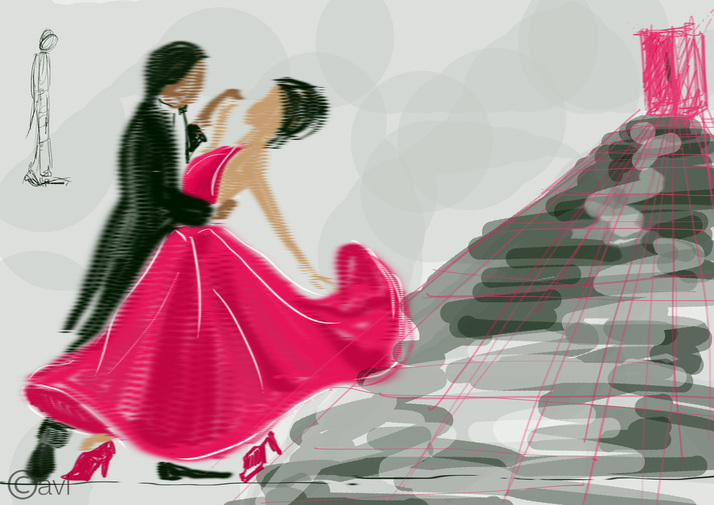 His mettle took him through the aureate vent,

To a site that lay across the amorous shoal.

He passed the gates as a gothic gent;

In the quaint, frantic search for his Ballroom Soul.


He stood in a nook of the regal hall,

His psyche, gasped by the lucullan squall,

Cloaked by his archaic, chartered suit.


He took a stair towards a solely dame;

Whose locks were gilded in scenic trance.

To his eager want of a frolic flame,

She turned to her consort, without a glance.

In his gloomy assays for an Elysian pace,

He seeked each maid of scant and range.

But his feat did fail in the path he would trace;

His yearning core, as if in a noxious mange.


As he stood in the foyer, both mazed and blue;

A call of an Eve then, seeked for his care.

A voice so cloying, he had heard rather few.

“A dance if we could?” she proposed a dare.


He crooked his joint to a sight which he gasped;

A damsel of the Eden stood in halcyon flannel.

With her glossy fingers, her drapes she grasped.

She was beauty of the grade in that purple panel.


All gazed at them, as they matched their steps.

Silenced with awe, their beauty and their grace.

They danced through the hall, as if Apollo’s reps.

In tracing the melody, the duad did ace.


As the chant did then pause and she broke the chord;

She just left the dorm in a haste of a doe.

He stood there in stun, as a lonesome ward,

No one to firm or keep his woe.


He pursued the maid through the aureate vent;

He paved his way through the amorous shoal;

He caught her trace in her jinxing scent;

In his quaint, frantic search for his ballroom soul.

Note - The Rhyme scheme holds a constant 'abab' pattern.
BACK

About the Author- Subhodeep Basu

An engineer by fashion, a writer by passion. My writing is vividly guided by emotions and displays a suave motley of feelings, hope, love and desire.

Rapist should be hanged "...Her dilated eyes scanned the inferno that the crowd had created. They rushed past her, brushing harshly against all the tenderness that she held within her. A claustrophobic sense of fear paid a visit, as the blood within the body began racing towards the brain. Thoroughly confused and disheveled with the encounter, her rational much as her sense of balance, collapsed. In the midst of this nervous flight, she allowed herself to be jostled around..."

Sunshine  "...It happened quite often that wherever I may be, I would find my mind far away from my surroundings and the sound of my guitar would fill my ears – the very tune I would have played the previous night- all six strings vibrating together, reverberating in my mind, entering me through the tips of my fingers, instead of my ears. Indeed, my life had made me dance on several tunes, till ..."


Caught in the Rain "...By the time, I could delve anymore over this thought; Dadu was there with the steaming cup of chai.  I firmly embraced my cold palms around the hot cup while one of these little ones picked up a seemingly old guitar from their grandpa’s shop and began strumming it to “papa kehte hain...”


The Adulterated Existence "...Twenty four hours later, I found myself semi-conscious in a private room of a hospital where surrounded
by men in white coat I was carefully diagnosed. I had passed out of alcohol overdose and excessive
inhaling of smoke had choked my throat and suffocated me. A psychologist there after tried counseling me and even she tried to convince me that there is no such personality as ‘Rohit’. I have created all by myself an adulterated self..."


Rings of Smoke  "...On a windy day, shyly sitting in a sty, Wrote he some lyrics, as this loony passed by, Saw he, the smoke rising, from the corner of his...remarked, "Along this current, even a pig could fly !"...The indolent fool, fancied a thing or two, From those lips, came forth a few, And still floated; pondered he, Why ?..."