The Sound Between My Ears
By Aditya Kejriwal 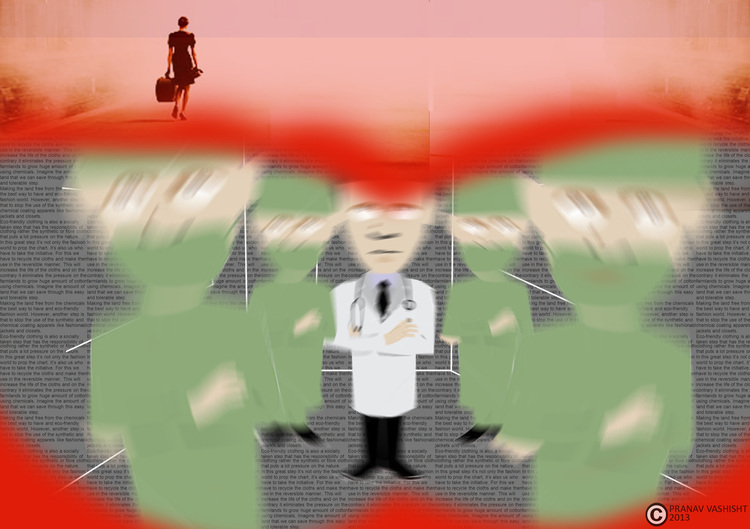 Illustration - Pranav Vashisht
The noise was irritating. It was not loud. In fact it should have gone unnoticed. But it got stuck

between my ears. Clear. Loud enough to keep me awake. The night was mostly silent. The

neighbourhood’s deserted even at day times.

There were other known sounds.

A cat was purring somewhere in the alley. I hate felines and I hated this one. I have always

wanted to strangle her to death. Nine times if I had to. Wish I could smash the landlady’s

grandfather clock on it.

The clock was ticking upstairs too. It might be her husband’s memory, but it was frigging loud. I

have given up on it after she got it repaired last month. I had pushed the ugly mammoth of a

thing down the stairs one day. I came drunk after the office party one night, and the monster

could still disturb my sleep. When I went upstairs to ask the lady to make it stop, I found the

door open. She was perhaps sleeping in the bedroom. I quietly brought the ugly Amazon

mannequin outside the living room and helped her downstairs. I still haven’t told the lady it was

me who did that. She can’t hear a thing else I am sure she would have smashed it herself.

At least she would have crushed the skinny boy’s guitar on his head. The strange little prick lives

down the hall on my floor; he plays it right in the middle of the night. Every night. When he

came to the apartment three months ago, he seemed normal. But I have hardly seen him leave

the place after the first few weeks. I think he is into smoking stuff. I have noticed some strange

people visit him at odd hours. And I can tell just by looking at him. He is too thin to be called a

man, almost mal-nutritioned. His eyes are bulging out and red, like filled with blood. The other

day I bumped into him in the morning.

“Good Morning, I am Dev. I live across the hall” I had to force myself to smile. His face was

scary even in broad daylight.

“Aren’t you the one who threw the lady’s clock down?” He said and started laughing. I should’ve

felt embarrassed. But the way his eyes popped out, I almost shuddered. And when he blinked, I

thought they were going to explode.

Today, he was playing his guitar again. I think the boy has talent, though he should know when

to bring it out. Luckily for him, the landlady couldn’t hear if he played right into her ears. And

when I am home, I’m too tired to care. But, not today. Today my mind was alert.

Between the cat purring, the clock ticking and the guitar, there was this other sound. It was a

familiar one. But what was it doing here?

The sound was very faint, almost as if coming from my past. I had heard it so many times earlier.

It was the sweetest thing ever. But it was scaring the hell out of me today.

I was freaking out. I closed my eyes. Now, I could see the source. It was Priya in the distance.

She was chatting with her friends, laughing animatedly. She made a little snorting sound when

she laughed. It was amusing to most people, but I loved it. It made her so imperfect and

different from others. Just like me.Everyone was laughing at her. She made the noise again, purposely

this time, to make them laugh. They all loved it.

After she left them, I followed her. I wish I had the courage to talk to her. I was afraid she will

make fun of me, like others. I cannot talk without stuttering, even in front of my parents, I don’t

think I will get past the first syllable with her. She went inside the library. In the farthest corner,

she took a book and hid her face behind it. All I wanted was to look at her from a distance. But

the book did not allow me to. I moved in closer.

I sat across her on the next table. Still all I could see was her silky hair. I thought of joining her,

so I stood up, picked up my belongings, and with all my courage walked towards her. As I

reached her table, my legs started shaking. I wanted to vanish from the spot. Disappear. I

decided to keep walking and not stop at the table. As I was walking past her, I heard her sob.

I looked at her. She raised her head and looked into my eyes. Everything froze at that moment.

All my fear and anxiety had vanished. I knew that sorrow. I had seen it in my own eyes so many

times, when I was made fun of. But I could not stand to see it in hers.

I dropped my bag and ran back. Blood was gushing in my veins. I thought they loved her. But

they made fun of her. They made her cry. None of them deserved to live.

I saw them sitting on the benches along the campus pavement, still laughing their guts away. My

car was parked on the other side of the road. I took the wheels and started the engine. I pressed

the pedal hard, and raced towards them. I wanted to crush their heads.

As I was about to crash into them, I heard Priya scream. I turned to look, and lost control of the

wheels. The car hit the porch. It toppled and came down on her.

I opened my eyes. I could see her still face in front of me. She was not laughing anymore. But I

could still hear the snort.

I wanted to hold her, to help her. But I was stuck in my place. My arms and legs were tied.

“Take her to the hospital. Save her.” I shouted with all energy left in me.

But they were in no hurry. They were focusing on me. Couldn’t they see her?

I think one of them was a medic. She gave me an injection. Everything became hazy. Priya was

gone. I was no longer in the car. Not even in my apartment. This was a strange place. Why was

Before I passed out, I could hear them talk – “He is getting worse every day. He keeps talking to

himself. Thinks he is living in some apartment with some crazy neighbours. We have to shift him

to another ward. I think he is developing signs of Schizz......”

Note - This entry was part of the recently conducted Quilled Words' writing contest. The entry reached us late and was technically disqualified. But since the entry was a very strong contender, a decision was taken to publish it for the benefit of our readers.
HOME

About the Author - Aditya Kejriwal

A new writer at Quilled Words, whose meandering ways with words struck with many. The storyteller builds up a slow crescendo only to very cleverly reach a suspense filled anti-climax.

Uncle Whitman says "...Perusing the horizon at sunset has always been an experience which brings many latent thoughts from the back of my mind into consideration. On such day, a line hummed in my head. It was a line by Walt Whitman from his poem, ‘I Sit and Look Out’.
The line goes like - “I hear secret convulsive sobs from young men..."