The Wife
By Ritwika Raha 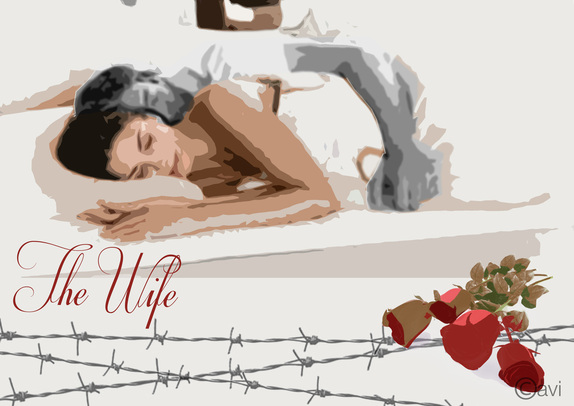 Illustration - Avi Agarwal QW Tip - Give a perspective to barbed wire and roses!! The story will tell you its several forms.


Her tall lean frame wrapped in her tepid skin lay uncomplainingly tranquil on that huge cot, swathed in
an impeccable white sheet. Her skin was all bruised, untainted and scalded in anguish. Her delicate crest
lay buried in the ruffled tresses which appeared like a massive deluge of dark hair. The scarred diffident
bare shoulders and her slender legs that peered through the fine cloth spoke of another rebellious night.
A soft beam of the winter sun invaded the commodious room and brushed against her brown flesh and
lathed her in its warmth. But she lay unaware and untouched!!

She pushed her hand out through that white cloth and rolled her skinny fingers to tame those wild curls
and furtively gathered her wounded frail body. Stretching her toes to reach the floor, she stealthily
perched her foot on the ground and nimbly slithered to the bath draped in the same white cloth. The
cloth dropped and she bared herself to that little mirror. She raised her toes to spot her painted skin and
warm tears dripped down with sour indignation and abhorrence. She had played a whore in those
bygone murky hours like every other night! She sprinkled some water on her stiff countenance,
sheltered herself in a massive gown and scuttled out of the bath with flippancy.

The silken robe flounced the floor as she rambled from that room to the kitchen, noiselessly in her
weighted emptiness. She stationed herself in one corner of the kitchen, contemplating over the
excruciating episode and poured a stream of water into the boiling kettle, gazing at the barrenness of
the lilac walls. Hours crawled by and with each dying hour her fears exacerbated. How miserably she
prayed for the day to stagnate! How ardently she craved for love!

The gilded beam of the sun gradually metamorphosed into a murky aura of diffused light as the indigo of
the evening ate into the vermillion sky and she waited in her room with a plethora of muddled thoughts.
She sat herself in front of a colossal mirror beside the little casement, mending her distorted curls that
the winter breeze had disheveled. There was a sudden knock that perturbed the silence and Nikhil
brisked into the room with a black leather bag clenched between in fingers. She slipped the hair brush
into a drawer, ran her slender fingers through her silken mane and scuttled towards him. She strived to
smile at him but before she could make any utterances, he hastened towards the bath. She bristled back
to the mirror and started taming her tresses again. The door opened with a creek and Nikhil stepped out
with a towel round his waist. Thin runnels of water trickled down his sinewy chest and she was
smothered the more in his sultry presence. His vital gleaming eyes rested on her with an unfathomable
wildness that ripped her into smithereens. She softly turned her crest towards him and waited for him
to budge. He straddled towards her intoxicated in his virility and harshly clasped her palms that held the
ivory brush. The comb dropped. Her lids fell in pain and he pressed her towards those empty walls. She
struggled to parry but his firmness held her tight in his stifling captivity. She cleared her throat to voice
her umbrage, but he portcullised her tender lips in between his teeth. She groaned and twitched in his
feral animosity and the grip intensified.

His fingers ran through her hair and rested on her short shoulders. Her sodden muted eyes gazed at him
with a sincere plea while his ravenous fingers pulled down the thin lace that tied the robe onto her
waist. The loosened robe fell off her shoulders, revealing her tender bruised cambers. He dragged down
the hanging attire and voraciously leaped onto her and devoured her femininity. Her nails scratched him
hard but who could resist the appetite of a man?

She stood pressed against the wall undressed and moaning. Blood streamed down her bosom and
smeared his skin in red. Nikhil gained consciousness and stared at the moist crimson blood that wetted
his shoulders. His brows stretched and his eyes fell on her weary visage. The prettiness had been marred
and her tresses had been ruined. The complaining girl had succumbed to his insatiable carnality. He was
suddenly seized with intense guilt and shirked back with a sudden jerk. He had lost to her.

He slowly bent over her, took her gently in his masculine arms and placed her on his stiff chest. Her
tired eyes broke into tears and her wounded arms embraced him back as he caressed her in his
tenderness.
BACK

About the Author - Ritwika Raha

This author is comfortable writing all genres. Words flow with the fluidity of her pen. Her first attempt at arousing the deep seated human emotions.