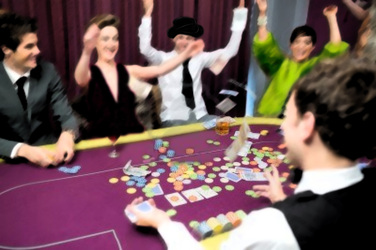 Vroom…..! A sharp cut towards the left, off the road, and the truck passed by, smashing the side mirror right into their faces. Each one in the car woke up with a start. Not but one could figure out what had made the sudden life-shattering sound, milli-seconds ago. And the next moment all they could feel was a light butterfly feeling in the pit of their stomach………..

Roy stepped in the casino with mere fifty grand in his leather Louis Vuitton case followed by his friends. All four of them were excited about their New Year bash. They have been planning this trip for months. Finally their prayers of gambling at the Royal Casino had been answered and they would now, be able to gamble all night long to celebrate New Year unfurling. Eyes turned in the casino, as Roy entered, dressed in a chic Valentino suit.

A silhouette had been at his toes since the accident on the bridge. Roy could feel its presence even at the casino. He ignored his whims, for the idea of dollars seemed more enthralling. As he walked past the huge glass door, he heard a sonorous voice. He turned only to face an old the monk mumbling. It was not his timid voice but his intimidating words that made his heart skip a beat. “Death walks faster than the wind and never returns what he has taken”, he slithered. By the time realization dawned on Roy, the monk had disappeared. Some said that it was his nervousness; others discarded it as the delusions of a drunken brain.

Brush with the monk did not linger long in Roy’s mind; he was soon consumed by the lusty ambience of the casino. The first thing that he wanted to test his stars at - was the Russian roulette. Luck charming mistress was by his side.

He went on a winning spree, lost in the adoration of pretty ladies that were flirting notoriously. The night was arousing with drinks, maidens and more tinkling of the coins in the slots. Money was pouring in, like he owned the night. It was 7 in the morning, when it struck them that they had been betting all night long.

Yuvraj, was exhausted. He longed to be in his bed with Lindy, whom he had met a few hours back. He wanted to drool over his money and make more at the famed tables of the UAE. He convinced Roy to check out of the hotel and leave within an hour. Although Roy was sleepy, yet he was reluctant on handing over his BMW to any of his friends. They gathered all their chips, packed their stuff and hit the road.

Roy believed in himself that no matter what the circumstances might be, but when it comes to driving, he will never have trouble gliding his wagon. Before departing from Goa, Roy ensured that he was high on caffeine; so that he doesn't sleep off while behind the wheel. The waiter was almost left wondering when he had ordered his sixth cup double shot espresso.

After about 70-80 miles, they had reached the cliffs. The weather was soothing. Sleep played a lullaby and rested on their eyes. Roy took a look at his friends, who were snoring in a melodious rhythm. Roy thanked God that at least he wasn't going to doze off. But it was like the devil had heard him, in a split of a second he closed his eyes to rest them in a blink, to get rid of the irritation. The next moment when his eyes opened, the first thing he saw in front of him was the flashing headlights of a gigantic truck coming from the opposite direction. In order to avoid bone-chilling accident, in sudden scare Roy swiftly turned the steering wheel to his right, and that became the worst mistake he had ever made. The BMW went down the valley in a whoosh! Roy now almost knew, how this would end as fear crept in from all sides, and his short life of 27, flashed in front of his eyes. The car smashed to the ground and the steering wheel tore into Roy’s body.  Right side of his rib cage had collapsed. Crushed bones were making it very difficult for him to breathe. Yuvraj had hit his head. The prickly edges of the windshield had disfigured his face. Roy gasped in pain as he tried to pull out of the car. In the back seat the other two friends wrenched in an attempt to protect themselves. The car flew right off the edge and hit the ground. They next few moments that followed were in pain and exasperation. Their eyes turned into red torturous ones.

Yuvraj wiped the tears that rolled down his eyes, as he sat in the comfort of the cushioned armchair. Even after thirty years, when he recalls what had happened, makes him shiver. The agony of losing a beloved friend in the anxiety to be in the console of his home filled him with remorse. Only if they had rested for a while and then departed for their destination, Roy would have been alive.

About the Author - Sangeeta Ghosh

I believe in living in every moment. I write seldom, but when I do, I love it!!
Quilled Words © All rights reserved.
Powered by