A walk through the Woods
By Subhodeep Basu 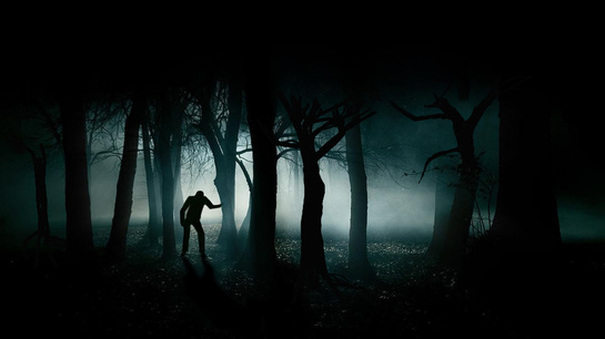 He taped his eyes on the bouldered route,

The path of his twilight pass.

He strolled ahead with bantam strides;

His psyche and the nature amass.

Gushing in its carefree flight.

The firing ball was then calm and cold;

as Erebus embraced the woods.

On the spur of a moment he heard a noise,

in the septentrion of where he stood.

He walked ahead without a leanest tending,

Wacky in his aimless stride.

The woodland was veiled by an ecliptic cloak;

From the nook of his eyes he just caught a glimpse,

A sight at perilous range.

A spectre in a hood stood tall and stiff,

His nous and psyche derange.

In a twinkle of lids did it fade in the dark,

“Who is it?” he shrieked, his voice was sibilant,

He stood in a caitiff stance.

He turned around from the sight and then walked,

His movement did then pace.

A grimish voice out of the blue choked his ears,

He stormed as a craven dace.

The infernoish wood was dark and dead, and

wrenched him to its aphotic heart;

He sprinted in a flash from the sulking hell,

His soul and trunk apart.

He tripped on a lumber as he ran for his soul,

He fell on the sideway grass,

He screamed for his life as he lay on the ground,

On the path of his twilight pass.

An engineer by fashion, a writer by passion. My writing is vividly guided by emotions and displays a suave motley of feelings, hope, love and desire.
Quilled Words © All rights reserved.
Powered by